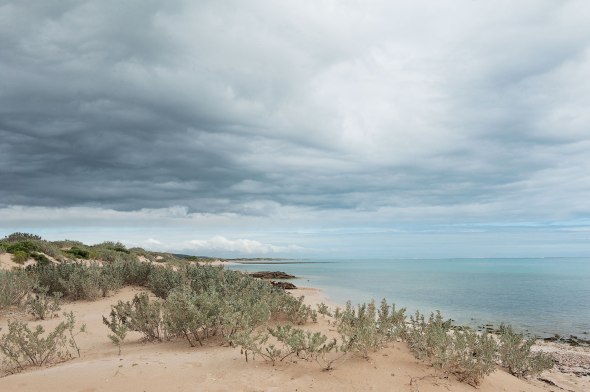 I am quietly finning along, snorkelling for the third time that day at Lakeside, on the Ningaloo Reef in the magical Cape Range National Park. If this rings a bell, it is because I harp on about the place incessantly, there is so much life out in the water. Along with Turquoise Bay, it is a favourite with day-trippers. Borne by tour buses, they amble to the spot with the snorkel marker, march directly out for around 30 metres, flop about for 20 minutes, then retire to shore to smoke, look bored with precision, and burn a new layer of ‘it sucks to be my family back in Europe’ into their undernourished frames.

It was at Lakeside that I had an epiphany in 2008. With nothing but the rasp of parrotfish beak-on-coral in my ears, my brain found a space to discover I actually wanted to be a photographer. (And a marine biologist – but that ship had sailed). Snorkelling or diving is the only time I truly switch off. Underwater, where air is generally absent, is ironically when I feel most able to breathe. The eternally blue space, without walls or fences, represents endless possibility for me.

So, I am quietly swimming in and around the rocky outcrops, following a fish that completely changes its colour and pattern as I get close or back off, a peeved turtle, 4m ray, and pausing to watch a plague of parrotfish engulf a patch of coral, the tiny territorial resident fish dashing out and back nervously. Just when it could not get any better, a huge school of mackerel and other silvery fish with wide eyes swept past and then started circling me, gaining pace as they went round. I decided to join their circling, and as I went round and round was thinking “Choice! They think Im their bro! I’m a mermaid!”. Amazed they cared not a whit as I whipped by the other fish and matched their crazy changes in direction, I was at once silver and fishy. Then it occurred to me. They are commonly known as bait-fish. And a school of darting bait-fish are probably being chased. Not that those three reef sharks and their homies, Trevor Trevally, and Barry Barra, liked the cut of my gib, but it’s safe to say I found myself ashore with no recollection of the breathless flail between realisation and landfall. 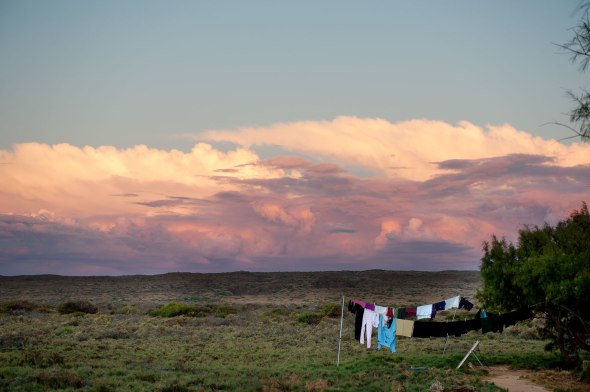 view to the west

When we returned to our camp, we shared a beverage with our lovely Swiss neighbour, J, a fellow water-baby with designs on the outer reef. He had travelled for some months around WA in his wagon, sleeping in the back, and reliant on a dwindling collection of camping ephemera. As days rolled by he realised he only used one plate, cup, knife, fork and spoon. Subsisting happily on long-life wraps, honey, nutella, and canned goods, his camp stove, multiple devices of convenience and esky (chilly bin) found new homes with the Belgians that packed every other camp site.

J wanted buddies to go and explore the outer reef. He had gone out on his own but was worried he may be…ahem…taken, and no-one would know. Fortified with a zesty cider from Harcourt in Victoria, I found myself consulting tide and moon charts and committing both W and I to an outer reef expedition with the excitement I always have when an adventure of any kind is afoot, and drive I have to never miss out.

The following day, in the last 30 minutes of an incoming tide was the only opportunity in the next 7 days, when the tide would be high enough to swim over the reef edge. J knew the way and so three small figures swam out to the reef, quickly invisible to those on shore. The thing about a reef is that waves from the outside hit the edge, rise up and then smash down. Along with a titan tidal-pull, I found myself swimming two strokes forward, getting drilled by excitable waves, then dragged back 4 strokes, enjoying a nasal flush along the way. I don’t think it is a spoiler alert to say we made it, and the silence on the other side was astounding. The water clarity, unmatched. A long shelf of volcanic rock and an amazing variety of coral sat around 15 metres below us and ran out about 40 metres before dropping off into Predator World. As we followed the edge of the reef, we swam over enormous cracks in the reefs surface, so deep you could only see fish in the first few metres framed by blackness. Think awe meets terror. Leaving a sacrificial layer of dermis on the way back over the reef edge, we plotted to do it the next day, knowing full well the ideal conditions to go over the reef, had past.

Again at dusk, three figures headed out, this time for an elusive gap in the reef that we could sneak through. It was a much longer swim and after about a kilometre, I found myself musing on the relative benefits of such activities. There are bitey things out there, but I figure the risk versus reward profile points in the right direction. I never take the ocean for granted, and I accept the side of scaredy-cat that comes with the incredible beauty I get to breathe in.

The welling surf and sinking sun loomed large in my overactive mind.  Stuff incredible beauty inhalation, I waved the boys on and with a feeling like there wasn’t enough air in the sky, swam to shore with an urgency that just skirted fish-in-distress. It is great to be alive.