← The Loaves and the Onions
The Upside →

You meet the most interesting people out on the road. Like the guy with a buffalo’s skull strapped to his caravan.

While driving through the Gibb River Road, he stopped without warning, grabbed his tomahawk and dashed off into the roadside shrubbery. His incredibly understanding wife and curious kids stepped out of the vehicle momentarily to investigate, before immediately retreating, driven back by the halo of death in 40 degrees. A not inconsiderable time later, he reappeared carrying the head of the recently deceased and highly aromatic beast, and strapped it to the front of their car. When they made camp that evening, he proceeded to boil the head in the largest vessel he could craft to reduce it down to just a skull and horns. (I involuntarily gag at the very idea of inhaling four hours of boiling three day old roadkill, let alone the FOUR DAYS it took to get rid of the meaty bits). It is going straight to the pool room when they finally get home in a few months.

Straight to the pool room!

Then there’s the guy who had a substantial-looking metal detector. The minute a campsite is vacated, he does a whip around. I couldn’t help but ask if he had seen the wonderful BBC series ‘The Detectorists’, (he hadn’t). Judging me as a person unlikely to take up the detector, he cagily revealed that the best places are carparks, especially where people change, like at the beach, or caravan parks. Surfers, and cashed up types like Kite Surfers, and Triathletes are the best for dropping stuff like money, jewellery, watches.

The best haul was $60 in coins in 20 minutes at a place that would not be revealed, but average coin hauls came in at around $16-20 a car park. Beaches swallow many a wedding ring.

Which reminds me of a set of keys I found on the coral floor while snorkelling at Oyster Stacks in Cape Range, Ningaloo. When we got back to our car, a set of four slightly confused visitors from Hong Kong were standing at the car next to us. We enquired as to the whereabouts of their keys and their sun reddened faces lit up at once. “You found them?”. Well yes, but batteries and salt water do not a couple make, and the old style key you usually get hidden in the electronic case was missing. As they stood there in their swimsuits and cute reef shoes, clutching a yellow pool noodle and snorkel gear, without phones, wallets or mobile coverage, going pinker by the minute, we knew we were the ones to take them 40km back to the hire company to get sorted.

It transpired that the hire company was useless. We ended up buying them lunch, a new battery, fixing their key, and driving them back to their car. And this is when I learnt that what is obvious to me e.g. never swim with your electronics in your boardies, apparently is not obvious to all. So many lessons. 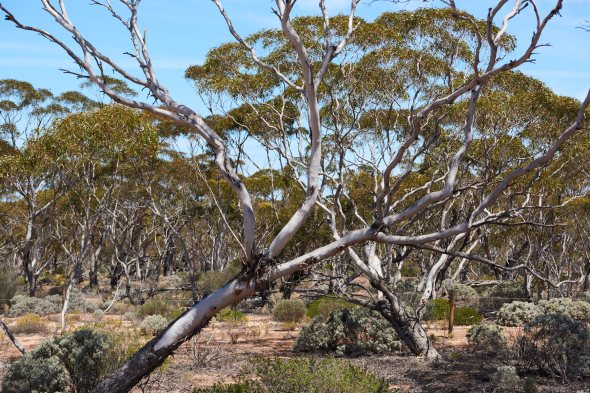 By the time we reached Ceduna, our self-administered starvation diet would end. When you cross the Nullabor, the border between WA and South Australia deprives your fridge of all that is fresh and good. If you don’t eat bread, or things in packets, the only thing you can find at roadhouses (a petrol station with souvenir stubby holders) is a menu released some hours ago from the burning embrace of the deep fryer. (To be fair, the roadhouses do make all sorts of fresh sandwiches and salads, and homemade desserts that were not in evidence that long ago. A time when you could buy DEEP FRIED LASASGNE. Oh, yes.)

But to Ceduna. We rolled up to the oyster shack just 30 minutes inside closing time, but things had changed. Where once you sat on the roof of the shipping container/shop in a roaring estuarine breeze, now they had expanded out the back, with flasher tables, chairs, and upscale cocktail forks. Upon sighting the $19/dozen price tag (a staggering 33% increase since 2015), Waz immediately cut the standard four dozen order down to two. These two dozen were gone in minutes, and a plan hatched to purchase more, direct from the oyster suppliers. “To Smoky Bay!”, the cry went out. 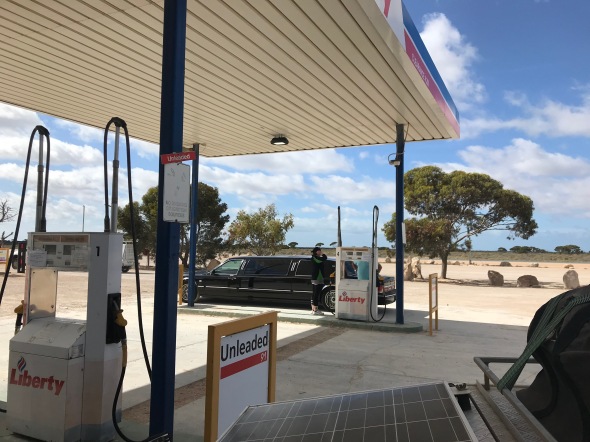 Limo on the Nullabor. Why not?

Smoky Bay has an immaculate caravan park with a kitchen and barbeque area the stuff of legend on Wikicamps. With our fridge offering nothing but eggs and UHT milk, we popped out to the General Store and found little that passed the paleo test. “No problem!”, said the lovely store man, “Have some whiting, and a slab of our own butter, and a tomato!” We repaired to the famous camp kitchen and were quickly joined by a collection of retirees, the number of which we had not encountered in one place on this trip. Bottles of wine came out, along with stories about all sorts of eyebrow-raising goings-on in Old Perth. Waz got very excitable, and taking an over generous draught of a Margaret River Cabernet Sauvignon, proceeded to cough, spraying most over the woman opposite him, with lateral collateral damage to the rest of us. Reminiscent of an episode of Dexter, the spray left a body shaped mark on the wall and floor, but happily did not slow the nights momentum.

Crime Scene clean up. Rare sighting of Waz’s other half. (Thanks Mum for Waz’s knitted beanie). Smoky Bay

The next morning, we had to dig deep for our down jackets and beanie; it was strange to be cold. We were headed for Port Lincoln via every oyster supplier within a 25km radius and the promise of a magical place called Memory Cove. Memory Cove had just five small camp spots, entry was by key from the info centre, and the road rugged, deterring crowds. How romantic!

A kangaroo. Just because.

Whats on the menu at WOKA?

This is what happens when the Head Chef at WOKA stares into an unpalatable fridge and declares it Guest Chef Day.

5 Comments on “The darnedest things”