← Gnaraloo we love you
On the road again →

And so it begins

With the nose of the Prado pointed skyward thanks to the several tonne payload, we roared off northeast.  It is wildflower season in the Golden Outback, and I am intent on photographing vast vistas.

We arrived late afternoon at the Western Flora Caravan Park on the Brand Highway, to the trill of multiple birds.  We set up with uncommonly minimal fuss and sat down suitably pleased with ourselves, to the first of many sunsets.  The immaculate facilities appealed to my city-fresh OCD, while W’s eyes lit up at the communal fireplace. Our fellow campers were farmers I estimate in their 70’s (he was in Ballarat during WWII) with a ‘slider’ set-up which is essentially a ute fitted out with all manner of fantastic slide out things on the back, with the bed on top. A hip operation made the climb to bed impossible for a spell but didn’t mean the end of their travels.

At the campfire W tested the flammability of his runners, while I discovered a gaping hole in my proud kiwi knowledge of the difference between fine and superfine merino, Italian fabrics, and Chinese wool mills. 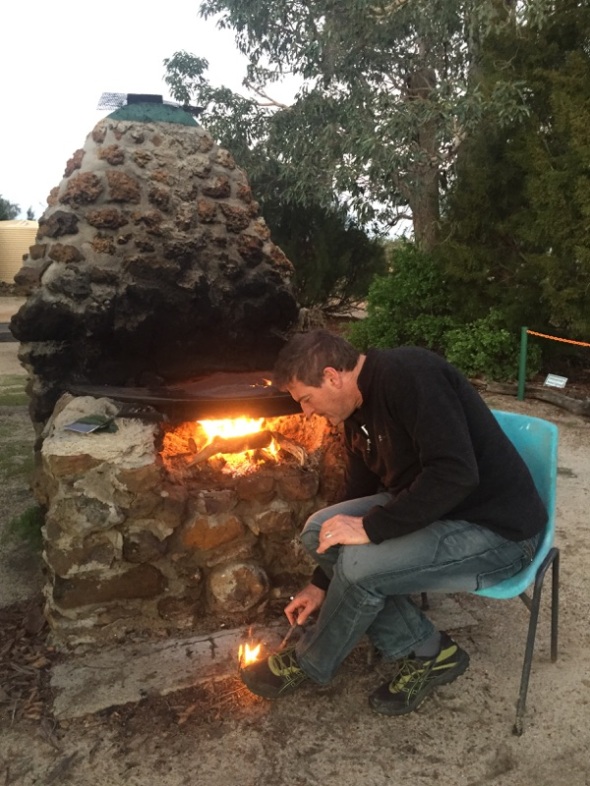 Generally, West Australian wildflowers present themselves from July to December, climate dependent. Recent heavy rainfall filled the land with life-giving moisture, which would mean an amazing display in a couple of weeks. After we left.

Undeterred, we headed north toward Mullewa, a town with its fair share of boarded-up shops, and nary a dog moseying down the main drag, yet you get the feeling the locals have given it a red hot go at creating points of interest. Signposted buildings from a religious past, historical walks, a Men’s’ Shed, and 4 planned ‘drives’ that take you in various directions were enough to have me thinking the annual wildflower and agricultural show on the last weekend of August would be rocking.

Along the way, wildflowers carpeted the roadside.  Individually tiny, it would be easy to roar past at 100 and not even see them.  Stopping the Prado bullet with its destination-orientated driver has given W ample practise in u-turning a trailer and discarding the golden rule of No Stopping Unless Fuel Tank Is Running On Vapour.  No Exceptions. 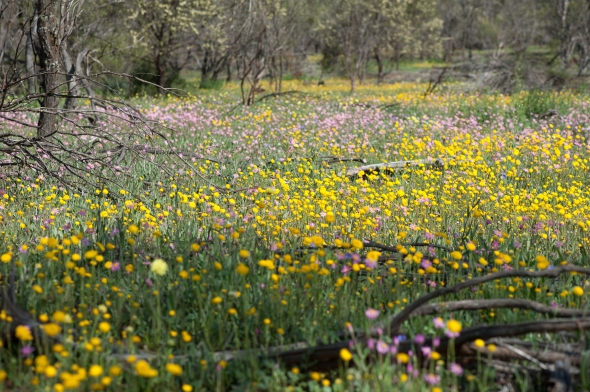 Unable to maintain possession of W’s 20 year old Scottish mega-fleece any longer, it was time to head to the coast and break out the sunscreen. We headed north with a plan to camp at Coronation Beach.  Arriving at dusk to a ‘camp full’ sign we pressed on, thinking Northampton could be an option. Some mates had stayed there for a few hours one night until the looting of vehicles outside their motel called for a 2 am mobilisation. A slow drive past the campground became a race north. Out of the sunset loomed Northbrook, a farm-stay/camp on a farm, with its own security in the form of a pair of Plovers and three tiny chicks. A Baltic windy night reminded us that random bits of tent flap require securing, and saw us packing up pre-dawn excited by the prospect of a UHT milk roadhouse coffee, and the Pickles Point fresh seafood shop at Carnarvon. Barista coffee and a massive bacon, eggs, and mushrooms at the Red Car Café, boosted cranky spirits, and a couple of hours later we found ourselves back at my favourite 3 Mile camp at Gnaraloo (pronounced Narloo), a fantastic camp and surf spot on the Ningaloo reef.

Western Flora Caravan Park – At 300 km from Perth it is a good quiet weekend spot, uncrowded, dog friendly, and with enough room to chuck a ball around with the kids. Great base for Coalseam Conservation Park, exploring the region, perfect for those excited by bush-bashing in search of rare and tiny orchids, and only 70 km from fish and chips at Dongara, a town keen on Australian flags. Immaculate facilities get 5 stars.